There is so much I often write about ‘back to school’ season, but this year, I have a new take on it.

Over the last few weeks, I was ‘schooled.’ For only the second time in two decades, I went out for a local theatre opportunity to play a dream role. This past Sunday I ended a short three-show run as Adelaide in the musical Guys and Dolls, and it tested me… big time! 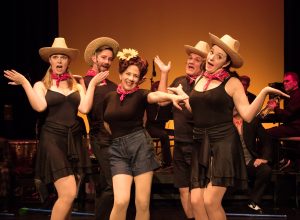 Adelaide and her Farmerettes

Snagging the role was a wonderful feeling and I enjoyed every moment of the whole process. Well, almost every moment… I wished we didn’t have to put on the show and we could have stayed in ‘play’ and discovery mode indefinitely. Getting ready to perform challenged my comfort zone. Anyone who has seen me speak or do theatre knows that I’m not afraid of being on stage. However, wanting to be the best I could be was an exercise in humility and perseverance. It was a tug between breakthroughs and disappointments.

I got schooled. Here’s how it went.

Language Arts– Luckily, this production was a ‘concert’ version. We were fully staged and choreographed but to keep costs down on sets (read none), to have script in hand. However, all songs were memorized. Damn! My mind which used to learn shows in ten days ‘back in the day’ struggled with that. Humble pie with a tough pill to swallow on the side. It was hard to accept that my dependable ability to memorize material was not so dependable anymore.

Math—When my oldest son was five and taking piano lessons, he would say “music is math, mom!” For community theatre, this show represented a high talent, highly professional group, many with degrees in pedagogy and vocal performance from prestigious schools. They came to the first rehearsal with their music learned! Ahhhh. I had to catch up on my ‘math’ and finding the time to study while keeping the rest of my life afloat was tough.

Social Studies—A small group of people gather with a common purpose. We are putting on a show. We go from strangers to friends over seven weeks to achieve a common goal. This one I could do!—easy class for me.

Gym-LEARNING DANCE STEPS. Developing MUSCLE MEMORY, practice practice practice. Just when I had one perfect execution, the next time would suck. Again, the inability to count on what was once a sure thing was upsetting.

Home Ec and Art—Almost as fun as learning and performing the role, was crafting costume pieces and personal props. I LOVE doing this. I can distract myself from other responsibilities for hours doing this. Pure joy.

Psychology—The horror of not being perfect. Despite studying with my voice teacher and having HUGE breakthroughs vocally on obstacles that have plagued me for thirty years, my goals for a perfect show every night were not reached. It became a lesson in hanging in there and giving it your all, despite setbacks and disappointments. I couldn’t give up midway because I didn’t hit that elusive perfection in one song. I found peace in thinking of Olympians who trained for years and could still have something go wrong in the critical moment when they were so close to the gold.

What happens when you get back to life after being schooled? You ask yourself: Was it worth it? Was there a gain? Were the lessons, mistakes and bumps worth the adventure? 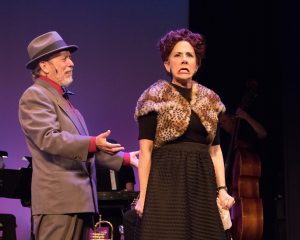 I set out to the get the role. I never thought about what I wanted out of it other than the joy of doing it. Once I started pressuring myself, I felt disappointed that I wasn’t flawless. I had a visceral experience of shifting in the understanding that you can still excel with imperfection and that it can be joyful.

Happy Back to School!